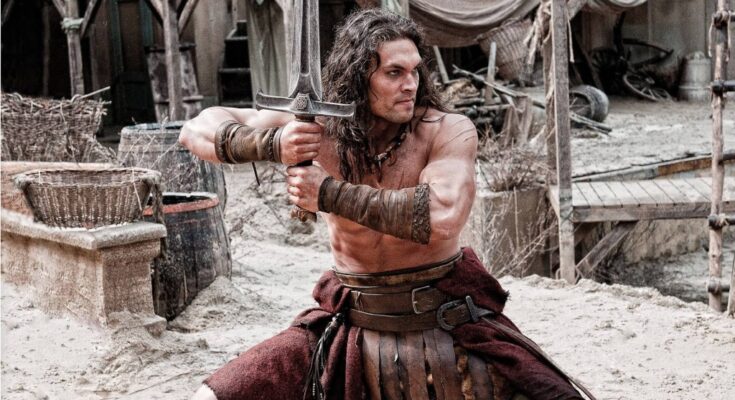 Long, long ago, sorcerers created the Mask of Acheron, and the evil forces of Acheron eventually took control of the entire world. However, the barbarians were victorious over the Acheron warriors and were able to break the Mask into pieces, which they then distributed among the different tribes. The evil warlord Khalar Zym launches an assault on the Cimmerian village ruled by the barbarian chief Corin.

Khalar Zym is seeking the final piece of bone from the Mask of Acheron in order to bring back to life his dead wife. After his witch daughter Marique discovers the hidden part, the evil sorcerer slaughters the villagers, leaving only the Corin family’s son Conan alive to tell the tale. Conan makes a solemn oath to exact vengeance on Khalar Zym. After many years have passed, the former warrior Conan has become a pirate, and he has made the decision to set slaves free from a field.

Conan recognizes the man being pursued by the guard as Lucius, the Khalar Zym’s soldier whose nose he severed earlier. This takes place while Conan and his friends are partying in a tavern. After allowing himself to be captured by the guards, Conan forces Lucius to reveal the location of Khalar Zym once they are inside the prison. In the meantime, Khalar Zym launches an assault on a monastery, which Marique believes is home to a descendant of Acheron who has pure blood.

The descendant Tamara, however, was sent back to her native land by the monk. Conan comes to her rescue when she is being pursued by Khalar Zym’s soldiers. Now, Conan plans to employ Tamara as a means of approaching the nefarious Khalar Zym. Will he be successful in accomplishing his goal?

Similar Movies To Conan The Barbarian (2011)